MP Duncan Baker is again calling for an independent investigation into the £1,000-a-day consultancy contract given to Peter Thomas Ltd by NNDC’s Lib Dem administration where there were known connections with Lib Dem Cabinet member Karen Ward. 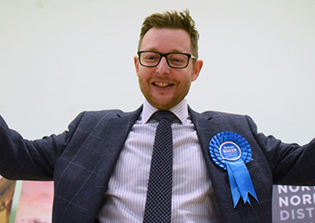 Quoted today in an article by the North Norfolk News, you can read Duncan's full response here:

“The Lib Dem administration should have obtained three independent quotes for this contract to ensure value for money, but they didn’t. There are also very serious questions to be answered about the so-called ‘exemption’ they have tried to rely on. Now a committee, set up under the Lib Dems, has decided there is no need for an independent investigation. This is completely unacceptable. There must be proper scrutiny of this contract award and the conduct of the members and officers involved in it. It is essential that in public office there is a high degree of transparency and integrity in all awards of public money.”

“I reject the capability review report completely and utterly. Its findings do not reflect my view of the council or its staff at all. Under the Conservatives, NNDC was one of the top-performing councils in the country, led by Nick Baker and Steve Blatch who are excellent Chief Executives and have given decades of invaluable public service. All surveys at that time revealed very high levels of staff satisfaction and the council won numerous awards. Under the Lib Dems, a huge amount of public money has already been wasted, and staff morale has collapsed. I fear as more and more staff leave, the situation will only get worse.”

“The danger now is that this report will unfairly affect the futures of hard-working staff. Given the serious concerns about the report, no decisions should be taken based on it. Instead, the capability review report must be discarded and replaced with a review arranged independently – and not conducted by anyone with connections to the Lib Dem administration.”

The Conservatives continue to call for a full independent investigation into the circumstances surrounding the awarding of this contract to Peter Thomas Ltd, and stand in support of North Norfolk District Council's able and committed staff. If you work for NNDC and would like to talk to us - in complete confidence - about your concerns, please contact Duncan directly at duncan@duncanbaker.org.uk or comms@northnorfolkconservatives.org.uk.